Euphorbia (also spelled euphorbea) was a relatively late-comer to the medical materials used in the medicine of the classical world. The plant was discovered by King Juba of Mauritania in the Atlas Mountains, probably during the reign of Augustus. Despite the fact that this plant was discovered centuries after the earliest Greek medical writings, this plant was quickly adopted by doctors of the Mediterranean world, and was described in both Latin and Greek texts.

The success of this was likely the result of Juba writing a treatise about the plant, describing it and how its latex was harvested for use, and might also have been assisted by his decision to name the plant after his physician, Euphorbus, rather than after himself.1 It is not possible to determine how much borrowed "authority" this naming might have bestowed the material, but we do know that Euphorbus's brother was famed in Rome for saving the life of Augustus.2
This latex was soon used for a variety of conditions, including but not limited to, the dispersal of cataracts when mixed with other ingredients because it burns3; in the treatment of snake bites by placing it into a deep cut made into the top of the head (I don't even want to think about what experiments occurred to discover this as this is one of the earliest uses recorded)4; and lethargus when mixed with vinegar (often translated as lethargy, but is more akin to a comatose condition) where the smell was thought to promote sneezing and thus wake the patient.5
But what exactly is this plant? When looking at historical sources which describe materia medica, identifying the species of plant or animal is the most difficult thing to do.6 Pliny described it as having the appearance of thyrsus (that is the staff carried by a maenad) and the leaves of the acanthus. Dioscorides stated that it resembled the giant fennel,7 the plant from which maenads made her thyrsus. The thyrsus was often taller than the maenad, and the plant commonly considered to be the giant fennel, Ferula communis, commonly grows 1.8-3m tall. So, this euphorbia which grew in the Atlas Mountains should be extremely tall, yet for more than a century now, ancient euphorbia has been identified as Euphorbia resinifera,8 a plant which is indigenous to the Atlas Mountains and produces copious amounts of latex used in folk medicine,9 but it only grows to 61cm in height and has no acanthus-like leaves. It looks like a ground-cover, whereas the giant fennel is completely different and tall. 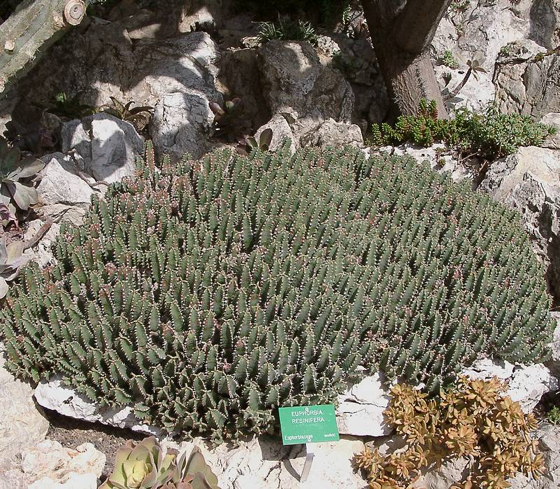 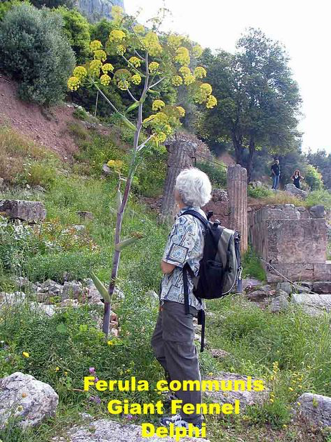 Yes, the plant described by Pliny might have evolved into this smaller form, but there is no evidence on which to base this. What it does gave in common is the appearance of the latex once dried. Pliny stated that it looked like frankincense, while King's American Dispensatory described the dried latex of E. resinifera as "irregular, yellowish, or brownish, slightly friable tears, of a wax-like appearance",10 a description that could be used also for frankincense.
According to the Euphorbia Planetary Biodiversity Inventory project, there are at least 2100 species of Euphorbia, something that I wish I had known when I impulse purchased a Euphorbia at a nursery last year because of my ancient medical research (by comparing cyanthia-the bunches of flowers- it appears that I had bought a E. millii which is actually Madagascan). While research is being done on the chemical composition of the various latexes of the more commonly known species, there isn't a lot of time devoted to the appearance of the latex. So today I made a small incision in my E. millii plant. Before I even removed my stanley knife, a bead of latex immediately welled up. 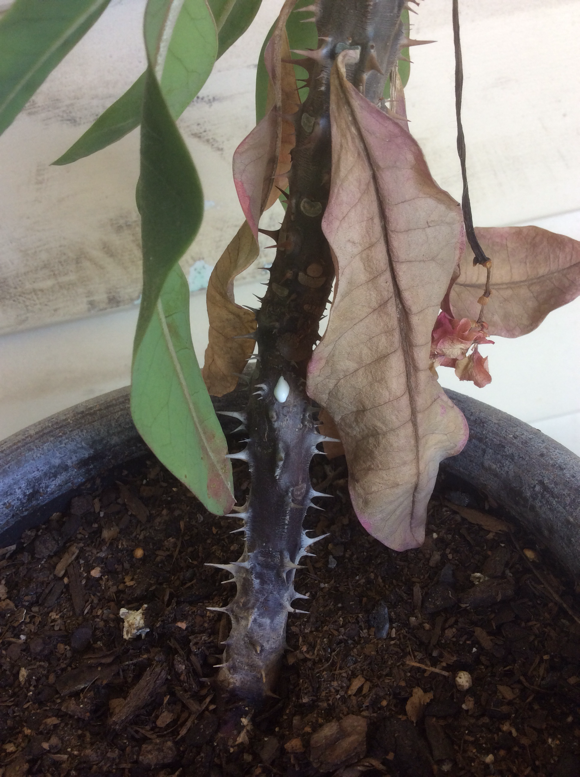 While Pliny described the harvesting of euphorbia latex as resulting in irritation, I placed this small amount of latex on my wrist and experienced no irritation. I did NOT place any in my eye, because I am not an idiot. No one recommends placing any Euphorbia latex near your eyes or any place really (please note that pointsettia are Euphorbia this Christmas). It's smell was extremely faint, and in know way unpleasant. If I can manage to obtain a sufficient quantity, I will attempt to dry this latex to see what it looks like. If it resembles frankincense, we might need to consider the idea that numerous Euphorbia species' latex look like frankincense and that this resemblance is not sufficient to identify ancient euphorbia with E. resinifera.


"In the age too of our fathers King Juba discovered a plant to which he gave the name euphorbea, calling it after his own physician Euphorbus. This man was the brother of the Musa we have mentioned as the saviour of the life of the late Emperor Augustus. It was these brothers who first adopted the plan of bracing the body by copious douches of cold water after the bath. Before this the custom was to bathe in hot water only, as we find that it is also in Homer. But the treatise also of Juba on this plant is still extant, and it makes a splendid testimonial. He discovered it on Mount Atlas: it has the appearance of a thyrsus and the leaves of the acanthus. Its potency is so great that the juice, obtained by incision with a pole, is gathered from a distance; it is caught in receivers made of kids’ stomachs placed underneath. Fluid and like milk as it drops down, when it has dried and congealed it has all the features [the Latin states effigiem, so this does refer to appearance] of frankincense. The collectors find their vision improved. It is employed as treatment for snake-bite. In whatever part of the body the bite may be, an incision is made in the top of the skull and the medicament inserted there." Trans. Jones and Andrews 1956 (Loeb Classical Library).